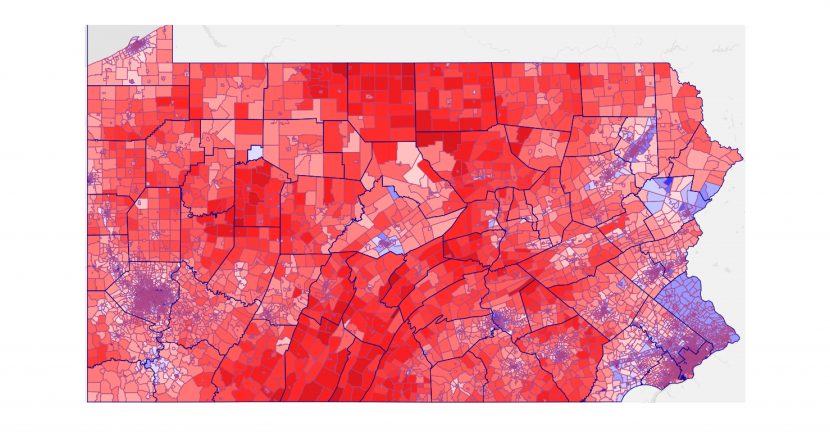 Only person from western PA in the race right now is Aliquippa native Jason Richey, a partner at K&L Gates

image caption: This is a map that shows partisan lean by precinct using data from the 2020 election. Map made via davesredistricting.org

The PA gubernatorial election is two years away still, but candidates are already announcing and beginning their tours of the Commonwealth.
One of the latest to enter the race is Aliquippa native Jason Richey, a lawyer who currently resides in Sewickley and is a partner at K&L Gates — the same law firm who former Sen. Rick Santorum and the late Gov. Dick Thornburgh worked for back in the day.

(You probably remember Santorum who has ran for president multiple times and continues to be a commentator on national politics on various cable news programs and is still alive and well. Thornburgh, who is from Pittsburgh, was PAs governor from 1979 to 1987, then went on to be US Attorney General until 1991, He recently passed away on New Year’s Eve 2020.)

So the pedigree is there for the republican Richey who touts his Quip upbringing and early blue collar work ethic amongst his many qualities that should help him relate to rust belt Pennsylvania. Honestly, that’s refreshing coming from the Republicans who all too often come from the upper class families (apologies for the generalization).

In an article in the Tribune Review on May 21, 2021 by Deb Erdley his background is well covered saying he used to work as a roofer, busboy and Mcdonalds cook working his way through law school in an Aliquippa steel mill. The guy is a worker, 49 years old, and is a father to three teenage sons. It all looks really good on paper.

He’s also from western PA, the only candidate so far. Other republican candidates are former Rep. Lou Barletta from Hazleton, former Montgomery County Commissioner Joe Gale, and state sen. Doug Mastriano, R-Franklin County, is also in the mix. From the democratic side, PA Attorney General Josh Shapiro is all but certain to be the candidate.

….to read the rest of the article, please buy the June 2021 issue by filling out the form below…..